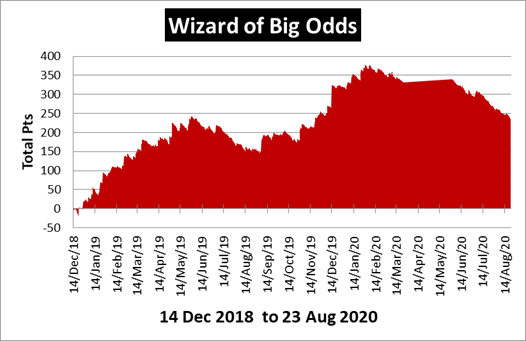 Below are the monthly figures since we started tracking Wizard of Big Odds.

Wizard of Big odds is a service provided by The Tipsters Empire network. The Wizard has a long history in the sport, like many tipsters following since childhood. He’s even owned his own horse. You can read more about him on the Tipsters Empire site. The service covers both Flat and National Hunt racing, providing tips that are mainly of the longer variety in price.

We reviewed the service between 14th December 2018 and 21st March 2019 and it produced the following results: 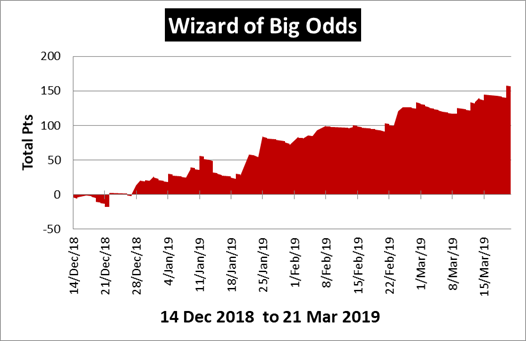 This is undoubtabley the sort of chart you want to see with a mostly upwards trajectory across the review period. To end up with nigh on 180pts profit in just over three months is a staggering result. The ROI a sensational 91.24%.

I should also add, this includes a winner tipped at 50/1 but only recorded at 25/1 as it was subject to a gamble as the selection was sent out. Hence some members made even more.

Wizard of Big Odds varies the stake sizes and offers both win and each bets. The significant factor here is they are all profitable, with the exception of the 0.25pt e/w stakes though the sample size is small.

Picks are sent usually between 9-10am each day by email, text message and are also available in the members area on the Tipsters Empire website. From time to time they are sent over the night before. A full write up is provided for each tip with the level of detail provided very high in comparison to most services. This gives a good insight into how the tipster is thinking and why he is making the selections. An example of a tip, plus write up below:

‘A typical wide open handicap for the Betfair Exchange trophy (formely the Ladbroke) but the selections has plenty going for him. He won the county hurdle at the festival last year off just a 6lb lower mark on similar soft/heavy ground and he might even be improving. He’s had excuses in his two runs this season but was a real eye catcher last time out in the Greatwood hurdle when the ground was too quick for him. After jumping the last and turning into the straight he was still right out the back in a hopeless position but stayed on very strongly to be 7th of the 18 runners and these conditions should play much more to his strengths.

He’s shown he’s in good form with another creditable run previously behind Silver Streak and he’s shown he goes well in big handicaps. The Skeltons tend to do well at Ascot and a big run is expected.’

Wizard of Big Odds is clearly a shrewd tipster and as a result SP’s are often lower than those advised (although there have been some drifters). As such it’s important to get on fairly quickly once the advice is given.

The recommended betting bank is 150pts which obviously never came close to being an issue during the trial. Looking at the history of the service it has never been an issue either.

The cost of the service is £34.99 (inc VAT) per month on the standard monthly plan but further discount can be had with quarterly, six month and annual plans available. The annual plan is £279.99, a 33% discount.

Wizard of Odds has shown itself to be an incredible service both during our review and since it launched in July of last year. Working to £10 per pt the service made £553 per month during the review, a profit of £518.09 after subscription fees.

The customer service is first class. Detailed write-ups of selections and a review of the previous days action means emails are eagerly looked forward to each day.

The Tipsters Empire service is one of the best out there and responses to queries are almost immediate.

Click here to learn more about Wizard of Big Odds!