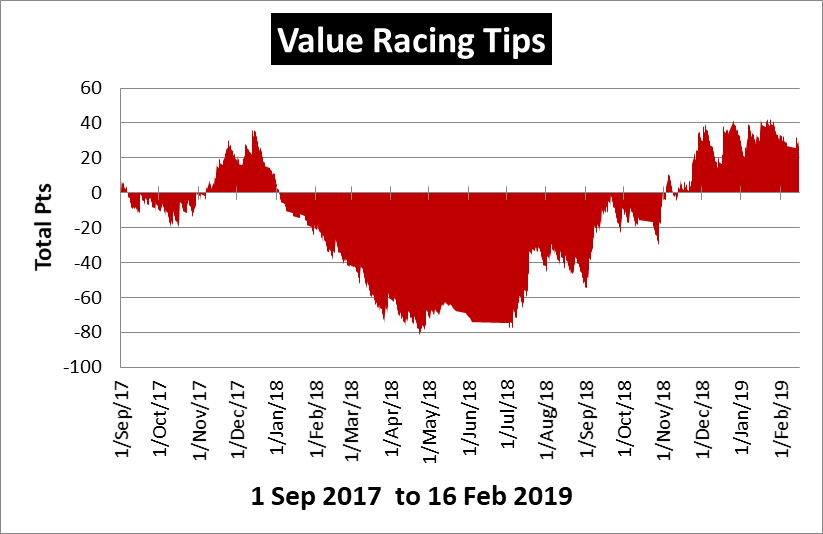 Below are the monthly figures since we started tracking Value Racing.

Since the original review of Value Racing the service has moved from Betting Gods to Betfan. Rob suffered a pretty serious illness during which time he tried to keep the service running but results began to suffer. It was then decided to close the service.

Upon returning to health the service is now running, as mentioned, via Betfan. As it is essentially the same service the review below still stands and the results from both the Betting Gods era and Betfan are shown above.

Value racing is another horse racing service that is part of the Betting Gods group. It’s actually the longest running Betting Gods service having been offering tips from Day one of the site. That in itself bodes well.

It is a very straight forward service to follow and one with which you know exactly what to expect on a daily basis. Each day Rob gives out three selections all to 1pt win stakes. The picks are released earlier than most services, usually between 4 and 5pm each afternoon. This can mean that many bookmakers have not yet priced up. From our experience it hasn’t been vital to get on quickly as prices have for the most part held up well for most of the night and in some cases as more books are priced up you can actually gain a better price a couple of hours after the picks are released.

The advised bank for Value Racing is 125pts which is a figure that would never have been close to being in danger in the history of the service.

So, how did Value Racing fair in our review process? After a nice start which saw us 8 pts up on day 2 things did take a turn for the worse and we ended up 9.46 pts down at the end of September. The first half of October saw the service struggle to gain traction and at one stage on the 17th we found ourselves 20 pts down. For longer term members that is just a small blip but anyone joining at the beginning of September they would likely be beginning to feel nervous. As with all established services however patience is the key and it was rewarded as things turned around nicely in the second half of the review as we made 8.56 pts profit in October followed by 20.58 pts in November culminating in a total profit of 20.07 pts.

Historically Value Racing has maintained pretty much the same level of performance with the strike rate and Average Odds being very very similar. The long term ROI is higher at 15.32% but just a couple of extra winners would have given a similar figure in our review. Overall the service has shown a remarkable level of consistency in its lifetime.

The cost of Value Racing is £49.95 per month + VAT, although you can get the first 30 days for the sum of £1. The price is on the expensive side for a service of this nature and does eat into the profits somewhat. Based upon our review period we would only have been left with a couple of pts profit based on the £49.95 per month figure. Additional savings can be made by subscribing to the quarterly or annual options.

The two biggest attributes of Value Racing are its simplicity and its consistency. Each day you know exactly what you will be receiving, three selections, 1pt win and as such the amount of time taken is minimal. Odds hold up well and indeed there are occasions where horses actually drift out before start time and better prices can be obtained.

The consistency of the service should be lauded. With a four year track record to fall back on Rob has set the pattern of what to expect.

It is not a service that is going to pull in eye catching profits, a 22% strike rate at odds of around 6 isn’t going to do that, which leads us onto the only real negative and that is the price. It is expensive for what it offers. That said.. even after subscription fees a profit is made, especially if you are able to opt for the longer term memberships.