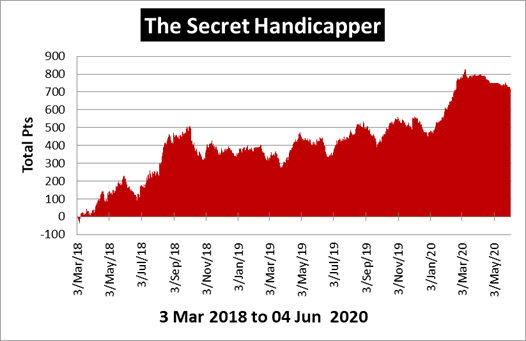 Below are the monthly figures since we started tracking The Secret Handicapper.

The Secret Handicapper is a horse racing tipping service that is part of the Betfan group. It is run by a gentleman called Ash and has been proofing results via Betfan since May 2017.

We reviewed the service for a three month period between 3rd March and 2nd June and it produced the following results:

As we can see the The Secret Handicapper excelled during the review period clocking up a mighty impressive 195.68pts of profit with an ROI of 12.58%. Based upon £10 per pt that is £652.27 per month profit, certainly not a figure to be sniffed at. 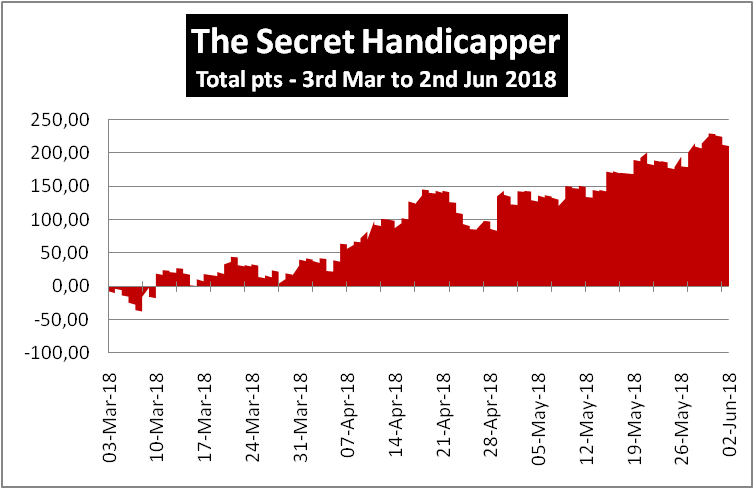 The Secret Handicapper got off to a sluggish start and indeed just five days into the review we were already 42.15pts down. It was in the main uphill from there however as within a couple of days we were in profit and never touched a negative figure again ending up on an outstanding 195.68pts profit.

There is no advised betting bank for the service but given the high volume of selections I would advise at least 200pts.

As mentioned The Secret Handicapper is a high volume service. Most days there will be ten selections permed from meetings all across the UK & Ireland both flat and national hunt.

The Secret Handicapper sends emails selections each morning between 7:30 and 9:00am for the most part (occasionally a few minutes later). They are sometimes accompanied by a short write up giving a brief recap of the previous day along with reasoning behind a couple of the day’s selections. This became less frequent towards the back end of the review and many days simply had the selections themselves. It must be noted though, there was no adverse effect on results so it’s clear the same time and effort was being made (perhaps more) on the picks.

More good news is that the prices hold up very well indeed with some selections even drifting in the market meaning there is no mad scramble to get bets placed before the odds tumble and no major red flags of taking ‘early value’ with the bookies.

Stakes range from 1-3pts with the breakdown as follows:

The figures show us that The Secret Handicapper is profitable regardless of whether advising longer priced outsiders to shorter priced favorites. His system of looking for value seems to be a winner.

The service is not a cheap one, the standard pricing is £48 per month or £96 for three months (effectively giving one month free). However, when you consider the profit made, those figures pale into insignificance. Even allowing for the standard one month subscription fee the average monthly profit was £604.

It’s clear The Secret Handicapper was a runaway success during the three month review, how about it’s longer term form?

The good news here is the Strike Rate is almost identical to our review period and the ROI is only 1% lower. The average profit of The Secret Handicapper remains above £600 per month since launch!

Wow, sometimes a service comes along that blows you away and this is one of them. The results produced by The Secret Handicapper were quite simply superb. You could even back the selections at just £1 per point and still make a profit after subscription fees.

It is a busy service, it will take you 5-10 mins to place your selections, depending upon how quick you are, but the rewards are worth it.

With such a large amount of selections each day (generally ten) a bad day or even couple of days do mean that losses can pile up quickly. With this in mind it is as always important you operate to a betting bank and stick to it. The good news is, as shown in the review, those negatives can be wiped out very quickly indeed.

Whilst The Secret Handicapper continues in this vein it comes with a very high recommendation. We will of course continue to track results and the headline graph and figures will be updated on a regular basis.