Below are the monthly figures since we started tracking The Inside Edge.

THE INSIDE EDGE REVIEW

The Inside Edge is a horse racing tipping service that is part of the Betfan group. It is run by a gentleman called Mickey O’Brien and has been proofing results via Betfan since April 2017. Mickey claims he has an ‘inside edge’ through his ability to price up a race, understand why horses win and lose and contacts within racing.

We reviewed the service for a three month period between 2nd March and 2nd June and it produced the following results:

The Inside Edge ended the review period in profit to the tune of 80.50pts which on the face of it is an excellent return. However, things were not particularly smooth sailing as you will see from the chart below! 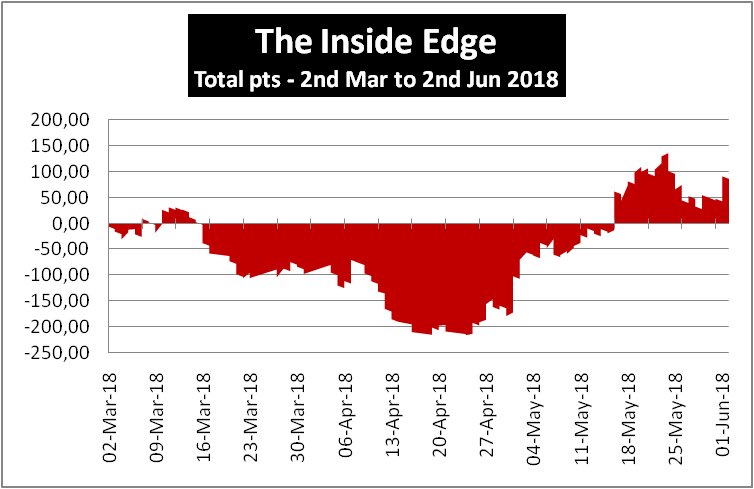 The first thing to note is that The Inside Edge works on a 5pt per bet staking system. This means two things, profits can be achieved quickly but equally your money can drain away very fast indeed and we saw both sides of that during the review period.

Almost two thirds through the review, on the 24th April The Inside Edge was 216.86 pts down, a staggering amount in less than two months of proofing. At this point there seemed no recovery for the service and an awful review to follow.. then came a Lazarus style recovery that took us to 113pts profit by the 19th May. Another mini dip followed before recovering again for the end total of 80.58pts.

There is no advised betting bank for the service but given the extreme variance of the service and the 5pt staking plan you would need at least 400pts.

The Inside Edge averages between five and six selections per day depending upon the number of meetings taking place and selections are for the most part sent out the evening before between 8pm and 11pm. There is often a further selection sent the following morning if Mickey has received some inside information. Prices in the main tend to hold up well with no significant difference between advised and starting prices.

As mentioned The Inside Edge operates a 5pt staking system which is broken down into 5pt win bets and 2.5pt e/w bets. The breakdown of which is shown below.

As we can see here the e/w picks performed considerably better than the win selections. Indeed if The Inside Edge only offered those picks it would have been a runaway success. It is too early to know if this is an anomaly or a consistent pattern but it’s one we will keep an eye on over the coming months.

The Inside Edge is an expensive service. The standard pricing is £68 per month or you can pay £136 for three months (works out to £45.33 per month). After taking the standard subscription fee into consideration the service made £200.33 per month over the review period.

The Inside Edge has results listed from April 2017 on the Betfan website as follows:

It’s interesting to note the ROI is 4% higher on the service lifetime so it could suggest the horrific run we experienced at the beginning of the review was more exaggerated than normal.

The Inside Edge has produced a strange situation where it’s brought in a very decent profit over the review but at this stage I can’t fully recommend it with a high degree of confidence.

The losing streak we experienced in the first couple of months of the review was horrific. 200+pts is a long way to fall behind in such a short space of time even when operating a betting bank of sufficient size. That said of course, the service did pull itself round with a tremendous run, mainly due to a series of nicely priced e/w selections coming in. The question is, did it simply have a very unlucky run through March and most of April, or a lucky run through May… or both? The life time results suggest it was an unlucky patch but I’d be more comfortable seeing a few more months of consistent returns.

We also need to keep an eye on the results split (win to each way) and see if the pattern we saw in the review continues.

As it currently stands this is a high risk with potential for high reward service. You absolutely MUST have a sufficient betting bank in order to make it pay, particularly with the cost of the service. If you do, it should prove profitable but you must be prepared for some major losing streaks.

I’ll be updating this review in a couple of months where we will have more information to help us answer some of the question marks regarding the service and hopefully they will be of the positive nature!

Learn more about The Inside Edge here