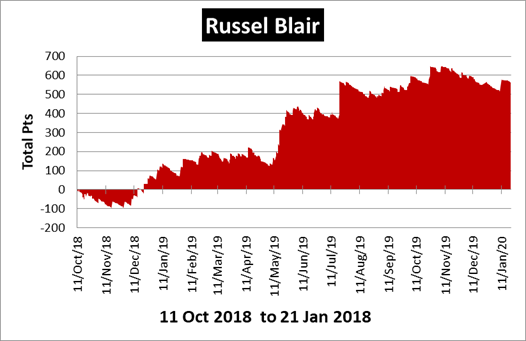 Below are the monthly figures since we started tracking Russell Blair Racing.

Russell Blair Racing is a service found on the Sports Betting Stars platform. Russell has been running a service since April 2015 and has enjoyed a great deal of success. We began to follow the service in October 2018, let’s see how we got on.

I began the review of Russell Blair Racing with very high hopes given all that I’d read and heard about the service. Unfortunately things did not get off to a good start, just over one month into the service we were exactly 100pts down! Things then very much picked up with that deficit being wiped out and then some in December when 168pts profit were made. Further profits of 49 and 50pts followed in January and February further cemented the healthy standing. Losses of 32pts were made in April and June but as they were either side of a massive 288pts profit in May they were barely noticed.

This kind of variation seen in Russell Blair Racing is common place is a service which concentrates on higher priced selections. The average odds across the review were 15.97 so winners are going to be at a premium. Almost all of the selections are win bets so the wait for winners can be a long one. As with all services and absolutely paramount with this one, the betting bank is key.  The advised bank for the service is 200pts and it is a figure I strongly advise you work too as there will be down periods as evidenced in this review.

Selections are sent out each evening usually between 6 and 8pm. The amount of picks can vary, from no selections a tall up to ten selections on particularly busy days. In most cases there are two or three tips given.

With selections given the night before this does of course lead us to the age old issue of ‘getting the same odds’. Certainly if you leave it till the following day the price will have changed in some cases (not all). Occasionally they go up, but more often of course the price will be lower. The profits the service advertises are based upon the price advised so it is important to move quickly when they are given. Open as many accounts as you can and spread your bets around.

There is occasionally analysis of selections but the majority of the time it’s simply the tip itself. Whilst some prefer to see some of the thinking that goes into a pick, in reality it the results that matter and that is what the service very much focuses on.

By the end of the review Russell Blair Racing was showing a profit of 402.20 pts with an outstanding ROI of 31.03%.  A review period of nine months shows that this was indeed no ‘fluke’ or as a result of a couple of big winners. It’s clear that Russell knows his stuff.

The Overall figures since the service launch in April 2015 are as follows:

These figures show that the service has produced similar results across it’s lifetime even producing exactly the same ROI figure!

As I mentioned at the start of the review, I entered this review with very high hopes and it is fair to say that Russell Blair Racing has lived up to them. The results produced cannot be argued with. If you’d have only followed at £5 per pt you’d have made £1650 with the subscription fees already deducted. £10 per pt is £3300. Not bad for 5 mins work a night over 9 months.

Russell Blair Racing seems poised to be challenging towards the top of the Confident Bets Top Tipsters Table for a long time to come.