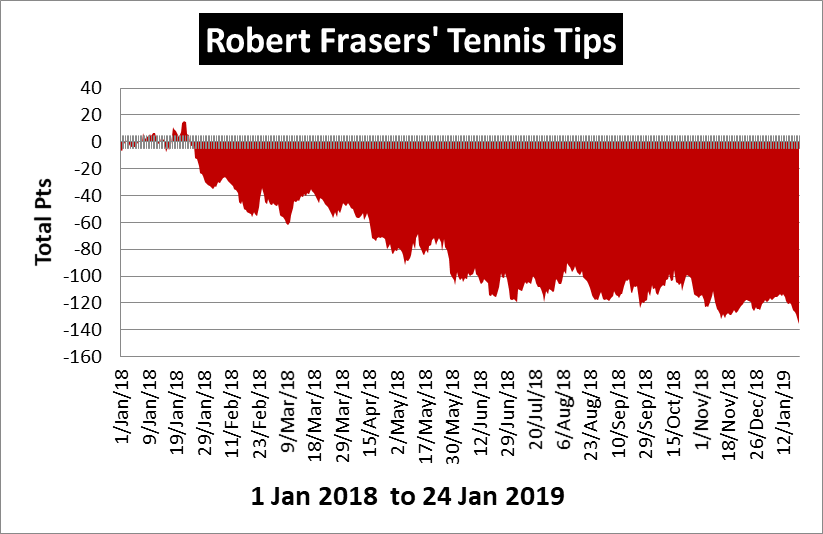 Robert Fraser’s Tennis Tips is a service provided by Betting Gods. Robert tells us that tennis trading is his primary source of income and he has been doing this for just over ten years.  He has given this overview of how he makes his selections:

“The concept of +EV (Expected Value) is at the core of my service. Considering factors such as court speed, conditions, player court time (potentially leading to fatigue) and form data come together in my statistical model to give a single numeric value stating the percentage probability of that outcome occurring.

For example ‘Player A Win’ in its simplest form.

The final stage is to compare this probability figure to the current market odds at bookmakers and exchanges.

If the outcome probability exceeds that which the odds would imply it is most likely a value selection that will deliver profit long term.

Bankroll management is essential. The strike rate is never going to be 100% and dealing with losing periods effectively is a crucial discipline to develop so that profitable runs can be fully exploited.”

We reviewed Robert Fraser’s Tennis Tips for a four month period between 1st January and 30th April and it produced the following results: 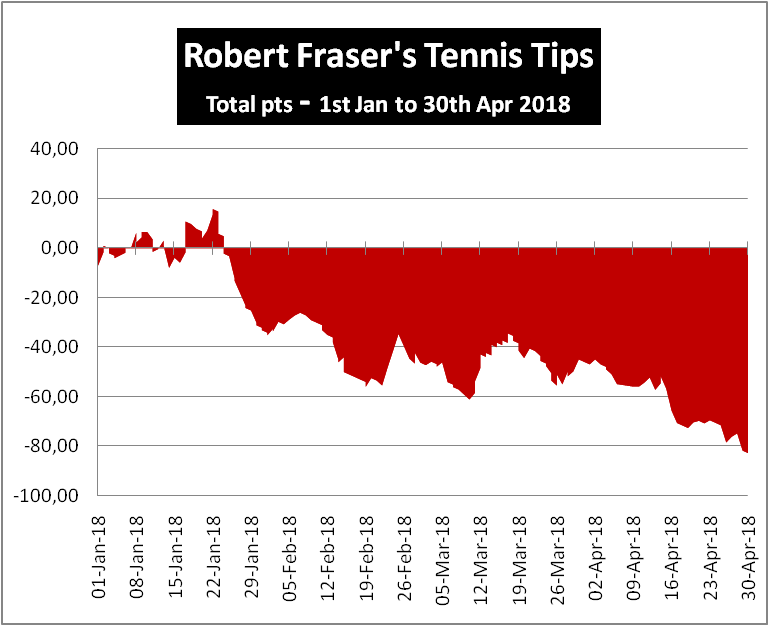 After a promising start in January things began to take a turn for the worse towards the end of the month and unfortunately never really recovered leaving us quite a hefty 83.88pts down by the end of the review period. The service advised a betting bank of 100pts so although it is not quite exhausted yet it’s obviously not a good situation to be in.

Selections are sent by email, usually between 7am and 9am each morning. They are also available via the members area. Downloading the Betting Gods app gives you a notification when picks are posted.

There are usually only one or two selections daily so it is not a time consuming service. In the early stages of the review there were fairly frequent explanations behind the picks but as the review progressed they be seemed to stop completely.

Stake sizes varied from 1 to 9pts throughout the review and it is here that the service ran into most of its problems as we can see from the table below:

Robert operates a system where the stronger the perceived value of a selection the higher stake he will recommend. He strongly recommends that the staking plan is stuck to in order to achieve profits. Unfortunately during this review the plan backfired somewhat as all of the stakes of 7pts and above lost, losing a total of 70pts.. the majority of the overall figure.

Indeed, had we stuck to a straight staking system of 1pt per selection we would have ended up -13.9pts. Obviously not great, but a lot better off.

From the sample we have seen thus far, the success or failure of this service depends upon a very small minority of picks. The bulk of the picks (118) were 1 and 2pters and they finished almost level (-1.2pts).

Since it’s launch in Feb 2017 the service has the following results recorded on Betting Gods:

The Strike Rate is not too dissimilar to that which we saw during our review.. 34.99% lifetime, 32.92% during the review. This again re-iterates that the larger stakes make or break the service.

The cost of the service on the standard plan is £40 per month (1st ten days for £1) + VAT. As always you can make savings by taking up a quarterly or annual subscription. All subscriptions come with a 30 day money back guarantee.

Clearly based upon the results generated during the review I can’t recommend Robert Fraser’s Tennis Tips at this present time. That said, it can quite easily turn around given the impact that the higher staked picks had. Overall the strike rate remained not too dissimilar to previous successful periods.

I think the next couple of months will be pivotal to the service, if Robert can recapture some of the success he had last year it may become viable to follow, but another couple of months like the last two and it could sink into oblivion.

It will be very interesting to see how it fares over the summer months.

As always, you’ll be able to track it’s progress from the headline figures and tipster tables.

You can learn more about Robert Fraser’s Tennis Tips  by clicking here!