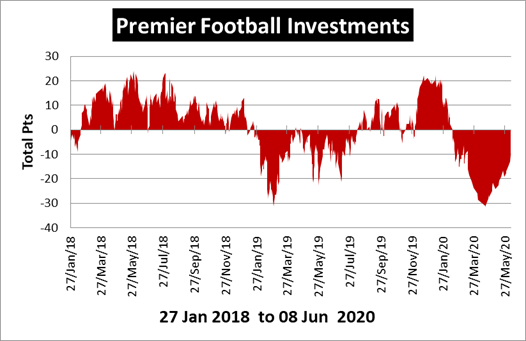 Below are the monthly figures since we started tracking Premier Football Investments.

Premier Football Investments is a service run by a gentleman named Carlo Manzoni who is described as a full time betting professional based in Rome. The platform is provided by John Baker of Banker Bets fame and the service has been operating since August 2016. We reviewed the service between 27th January and  25th May 2018 and it produced the following results:

Premier Football Investments brought in a profit of 22.74pts over the 4 month period, an average of £56.86 per month based upon £10 per pt. The ROI of 6.02% is decent for a football service. 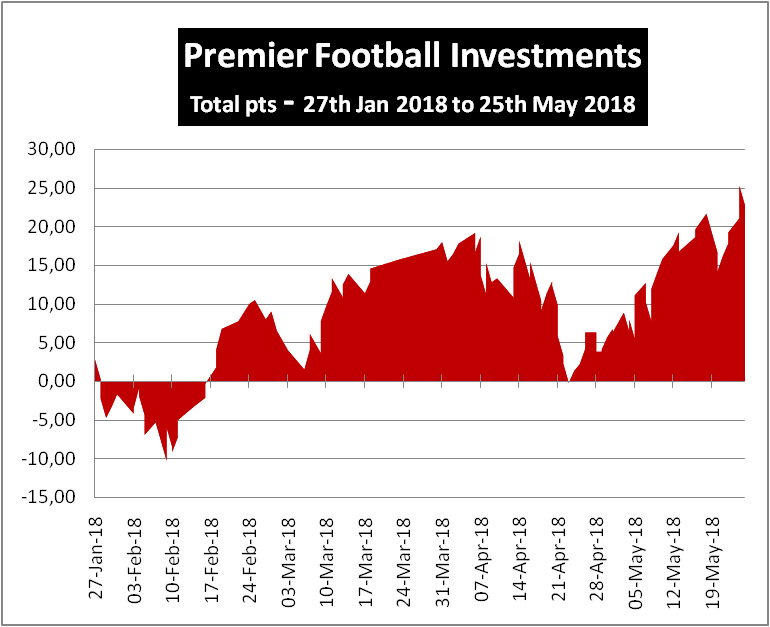 After a sluggish start Premier Football Investments returned a healthy profit by the end of our review period. The advised stake for the service is £25 per pt, so based upon our standard £10 per pt each selection was 2.5pts.

As mentioned a slow start saw us fall 10.98pts down 13 days into the review but within a week we were in profit. As the graph shows there were a couple of dips along the way, particularly in mid April but overall things trended upwards with a particular good final month.

A range of bet types are offered, the breakdown of which are shown in the table below. Selections are made from leagues all across the world but nothing so obscure that it is difficult to find. It is noticeable that the ‘Combination’ bets didn’t fare well over the review period, without these Premier Football Investments would have made quite a bit more. Whether this was just an anomaly remains to be seen but is worth keeping an eye on as we continue to track the results. By ‘combination’ we mean doubles and trebles of different bet types, for example an Asian Handicap selection and an O/U in a double.

If you are unsure of what each of these bet types are check our Football Betting Guide.

Picks are sent by email usually between 6am and 8am each morning (UK time) giving ample opportunity to get bets placed for games that day. That said, very often picks are given several days ahead of games so there should never be an issue of missing a pick. There are no write-ups on Premier Football Investments but you do get a recap of the previous day’s results and both the monthly and annual P/L figures are included on each email.

Premier Football Investments is selective in its approach averaging just 1.25 picks per day across the review and as such will take up very little of your time.

The advised betting bank is 40pts but this is working on the premise of £25 per point. As we work to £10 per pt, it effectively makes the betting bank 100pts which is a very safe figure to work with indeed. The largest dip we had during the review was a 19pt drop during April. Of course the bank was not in danger at that stage and results turned around nicely at that point.

One notable benefit is the prices given are ‘average odds’. This means if you look around, using Oddschecker or a similar portal you can often obtain better. The odds used for this review are those advised by Premier Football Investments and recorded in their figures, as such you can achieve greater profits, a definite bonus! In addition, as mentioned earlier in the review many selections are sent out well in advance, these should be placed at that time as they are games Carlo feels will drop in price as the game day approaches (and is usually the case).

The cost of the service is £4.95 for the first month and then £24.95 per month thereafter, inclusive of VAT.  You can also take out longer subscriptions which give you even better value. The quarterly subscription works out to £16.63 per month and the annual £14.42. All subscriptions come with a 30 day money back guarantee.

Premier Football Investments was launched on August 13th 2016, these are the results as taken from the website:

Overall Premier Football Investments is not a bad service at all. Selections are delivered well in advance, odds are easily achievable and very often can be bettered and most importantly it was profitable over the review period.

The high strike rate and low volume of selections given lends itself to higher stakes being used if you have sufficient betting bank to do so. This of course can lead to greater profits being generated.

It is very much a low risk service and although that means you aren’t going to ever pull in the eye catching figures that some services do, you also won’t experience the extreme dips that higher reward services do either. Essentially a nice gentle profit making service that isn’t going to consume much of your time.

We will of course continue to follow the service and update results accordingly.

You can learn more about Premier Football Investments by clicking here!