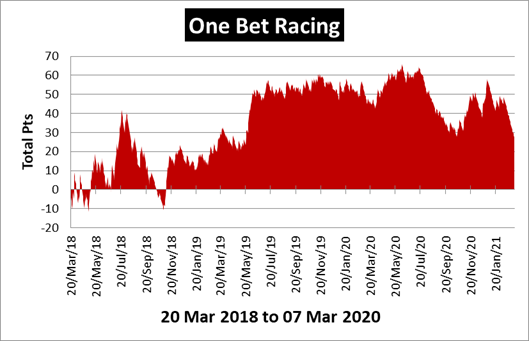 Below are the monthly figures since we started tracking One Bet Racing.

One Bet Racing is a horse racing tipster service that is part of the Betinfo24 platform. Launching in December 2017 it quickly proved itself, proofing results via the Betinfo24 blog before launching as a paid service.

One Bet Racing is extremely easy to follow, the name summing up how it works. Each day a preview of the day’s racing is presented with numerous ‘suggestions’ across a range of races. However, there is only one actual tip given each day and it is that tip the review is focused on. All tips are advised at a stake of £20, so as we work to £10 per pt they are considered 2pt selections.

The email is received daily between 11am and 1pm, usually close to midday. This still gives ample time to place the bet and helps to stay under the radar of the bookies as you aren’t chasing the early value. There hasn’t been any issue in obtaining the prices advised and they have held up well for the most part, indeed there are many that actually drifted before race time.

The advised bank for the service is 50pts which is a figure that should be safe given the nature of the service.

We reviewed One Bet Racing for six months from 20th March to 19th September and the results were as follows: 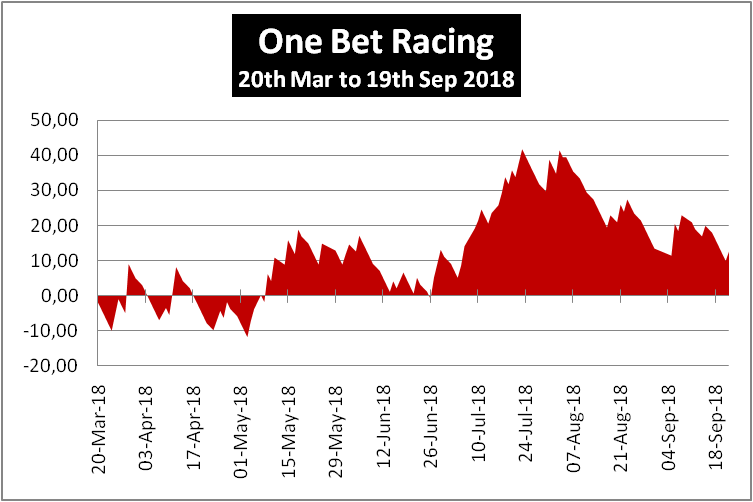 After a sluggish first six weeks or so when One Bet Racing struggled to gain momentum the service really began to pick up throughout May/June/July reaching a peak of 40pts profit. In August and early September however things began to unravel as a long losing streak saw much of that profit eroded before something of a recovery towards the end of the review leaving us 13.90pts in profit.

The cost of One Bet Racing is £1 for the first 7 days followed by £25.99 per month thereafter (including VAT). We generated a profit of £23.17 per month over the review so we would actually be a little out of pocket, primarily due to the awful August. There are longer subscription options where you can make savings, for example the Annual payment saves you £131.89 a year. The service comes with a 30 day money back guarantee.

One Bet Racing is still a young service and we’ll need to see more to establish whether it is a viable service to recommend. If we take away the month of August the service performed very well indeed so the question to be answered is, was August a blip or a taste of things to come.

As mentioned in the review it is an extremely simple service to follow and consumes very little time with just the one selection to place. You would need access to your emails during the day so bear this in mind if you work in an environment where you can’t check them.

The preview of other races on the day with suggested horses and a write up is an interesting feature. We haven’t tracked those results as they are not officially part of the service but we plan on going back and seeing if they proved profitable and will report accordingly.

In conclusion One Bet Racing is one to keep an eye on, if it can rediscover the upward trajectory it showed for much of the review it will have a bright future as its simplicity will appeal to many.

Try One Bet Racing by clicking here, just £1 for your first 7 days. Betinfo24 also operate a 30 day money back guarantee.