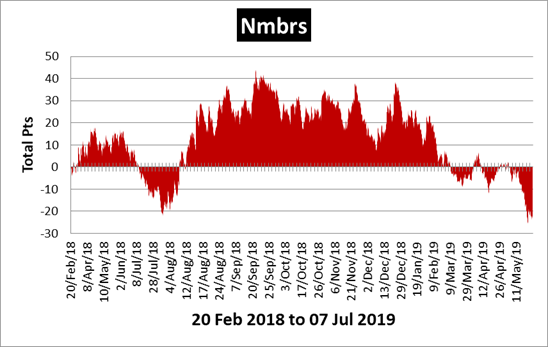 Below are the monthly figures since we started tracking Nmbrs.

We reviewed the service between 20th Feb and 19th May 2018 and it produced the following results: 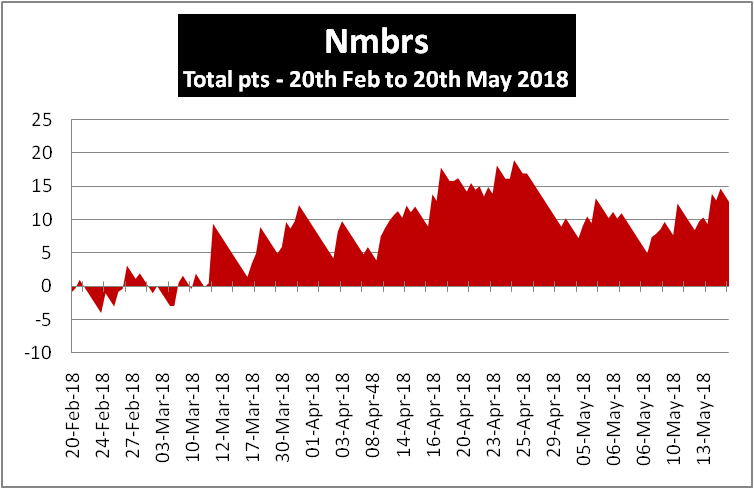 Nmbrs did a pretty good job of doing exactly what it says on the tin with the results produced during the review being very similar to its lifetime performance.

As promised Nmbrs is a selective service averaging out to between 1-2 selections each day. There is no set time to the selections being given but they are given well in advance, in some cases as much as two days prior to a game. There are several ways to receive your picks. They are all available via the members area on the Tipstrr platform from where you can set your account to receive push notifications when a tip is given. You can also elect to receive the picks by email as well. No explanation or reasoning is given with the picks.

For the most part odds are easily achievable although occasionally more obscure bookmakers are used which not everyone will have access too. It is of course beneficial to have a wide range of accounts to allow you to source the best prices where possible.

The vast majority of picks made by Nmbrs are of the straight ‘Win’ variety with the occasional Asian Handicap thrown in also.

Average odds are 3.40 and the strike rate of 35.14% is decent. The ROI during the review was 8.56% which is very respectable for a football service. The picks can vary in odds from as low as 1.45 to upwards of 7 so I was interested to see if there was any significant difference between the average odds of winning picks to losers. As expected, winning picks were lower, with average odds of 3.06 compared to the losing picks odds of 3.59. That isn’t a large difference however and shows that Nmbrs does have success with the higher priced picks.

The advised betting bank for the service is 20pts which personally I think is much too low. Although we had no issues whatsoever during the review period, when working to higher odds losing runs can and will occur. A figure of 40 or even 50 to be ultra safe is much more adviseable.

Nmbrs has a number of different subscription options. The standard monthly payment is £29. Based upon this it leaves us with a profit of £13 a month over the review. There are other longer term options of three, six and 12 months which provide additional savings. You can also pay £15 for 1 week but this is not something I would advise, firstly one week is far too short a time to assess a service and secondly the value is poor.

Given the number of selections advised is low Nmbrs is a service that lends itself to higher stakes.

Here is a chart showing you the monthly profit that would have been made with different stake sizes per selection during the review:

If choosing to use higher stakes always ensure you have a sufficient betting bank to do so.

As mentioned earlier in the review the figures produced in our review are pretty similar to those generated since Nmbrs launched:

Overall Nmbrs is a very promising service. Although it has the inevitable undulations it is overall very stable and provides a very consistent journey. The fact that the figures generated in the review match up pretty closely with the lifetime figures suggests this is a consistent trait.

Nmbrs is very easy to follow with little time taken at all taken with the limited amount of selections and simplicity of bet type. As such anyone new to football betting would have no problems in following the service.

I would recommend staking more than the advised £10 in order to get the most out of the service or profits are very small after factoring in subscription costs. Don’t go overboard however and stick to your bank.

The price of the service is reasonable and even more so if you take advantage of some of the longer term subscriptions/bundles available.

Overall Nmbrs receives a thumbs up and would be a good addition to your portfolios.

We will of course continue to track results and update accordingly on our Top Tipster table and the headline figures at the top of this review.