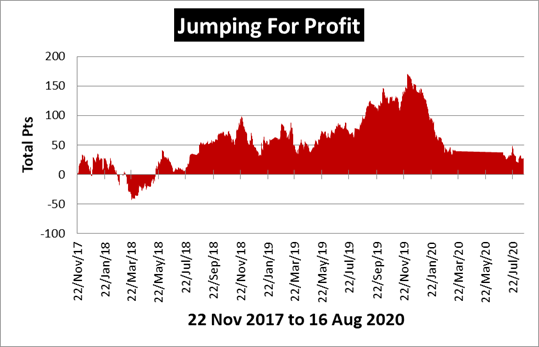 Jumping for Profit is another service provided by the Tipster Street Network. It was launched in November 2016 and focuses on National Hunt racing. We reviewed Jumping for Profit between 22nd Nov 2017 and 22nd Feb 2018 and it produced the following results:

As we can see from the graph at the top of the page we experience quite the rollercoaster journey on this review. Several times Jumping for Profit appeared to be kicking into gear and providing a good return only to be struck by a poor run which undid the prior good work. The last one of which was particularly painful and left us with a small loss of 0.92pts at the end.

It goes without saying that a minus figure at the end of a review is not what we are looking for but it must be said services can have spells of this nature and a loss of just under 1pt isn’t going to do any damage to your betting bank. As we continue to follow Jumping for Profit we’ll get a bigger picture and see if some of the dips can be eliminated to create a smoother ride.

An average of 2-3 tips are sent daily between 9am and 10am with picks being either 2ptWin or 1pt E/W selections (more on that shortly). Obtaining prices for the most part isn’t an issue, although some of the E/W picks the starting price can fall significantly by the off. Overall the advised prices of winners was 3.24 compared to a starting price of 2.79. That difference may not seem a lot but over 79 winners it can make a significant difference so it pays not to leave it too late before getting on.

The advised betting bank for Jumping for Profit is 50pts, which never came close to being in any danger during our review, indeed we were healthily in profit for the majority of it. More on the bank further on in the review however.

As mentioned above the two types of picks were 2pt Win and 1pt E/W and there was a noticeable disparity in the performance between the two as can be seen in the table here:

The figures above show that in the review period the longer priced e/w selections performed very well, but were let down by the much shorter priced Win picks. I was keen to see if this was a pattern that was repeated over a longer period of time so dug deeper into the results available on the Tipster Street site. Since Jumping for Profit launched, the profit on 2pt Win bets was 36.25pts, compared to 90.69pts on the e/w picks. Prior to the review those figures would have stood at 79.19pts profit for win bets and 48.66pts profit so this period was the exception rather than the rule.

The Overall figures since the service launch in May 2016 are as follows:

A close inspection of the figures show that Jumping for Profit has struggled this jumps season. At the end of July last year it was 178.93pts in profit, a figure that has now dropped to 115.89. Much of that is down to the lack of performance of the short priced Win selections we highlighted earlier. As a result, the advised betting bank of 50pts wouldn’t be enough in this case to cover so I would advise a bank of 100pts would be a safer margin to work with.

The cost of Jumping for Profit is £14.95 per month which as with all Tipster Street services is very reasonable. They also offer 75% off your first month, giving a figure of £3.79. Factoring in subscription .fees (not including the discount) we would have seen a loss of 5.41pts across the three months

At this stage I would advise Jumping for Profit is very much a ‘one to watch’. During our review it showed there was potential there with some excellent results with the e/w selections but prolonged slumps with regards to the Win picks really did drag it down. Overall we finished slightly down which in itself wouldn’t be majorly concerning but coupled with the general downturn in form since July last year it does ring some alarms.

As with all the services we review, we will continue to follow and update the results on the league tables and the headline figures at the top of this review accordingly.

Learn more about Jumping for Profit by clicking here.