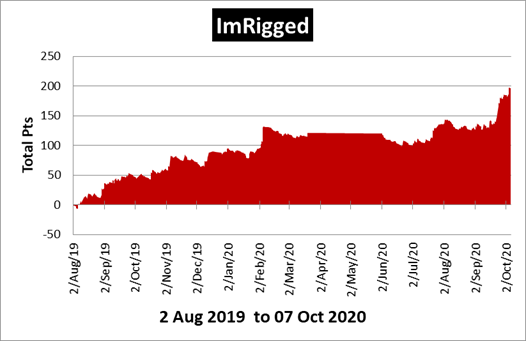 Below are the monthly figures since we started tracking Imrigged.

*ImRigged is now an evening service with tips being sent at 9pm each evening.

It also now offers a free month for every member any time the service does not make at least 3.5pts profit in a month..

ImRigged is a horse racing tipster service provided by Tipping Gurus. It is provided by a gentleman Mark who it is claimed has a long history in the racing business and has fine tuned his process to ‘optimum levels’. We have been following the service since launch with the following results:

The claimed ‘optimum’ process of ImRigged has certainly lived up to its billing with eight consecutive months of profit since launch. 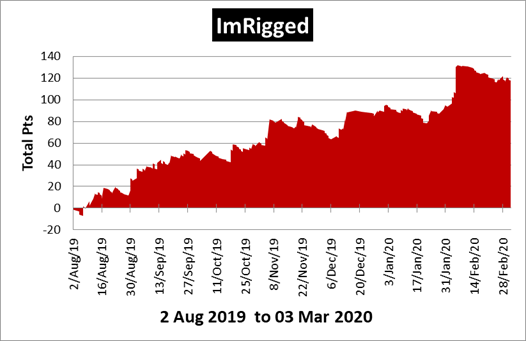 ImRigged is a very simple service to follow. Selections are sent out between 9am and 10am each morning. This allows the markets to have settled somewhat and also allows punters to take advantage of BOG if and where applicable. It also means the prices are pretty much always achievable which is a very important factor.

The staking plan is simple with selections varying from 0.5pts each way to a max of 1.2pt win bets. Most picks are either 0.8 or 1pt win picks. With an average of one or two picks a day it certainly isn’t time consuming.

ImRigged doesn’t just back favorites either, as the average odds of 8.28 testify.

No write ups are provided for the selections but the tipster does provide an analysis at the end of each month and generally gives some insight into his selection process.

A betting bank of 100pts is recommended for ImRigged which seems more than safe given the staking plan. Of course, as the service has never had a losing month we’ve not come close to seeing that tested.

The cost of ImRigged is £25 per month which is a very reasonable price considering the profits gained. There is also a quarterly option at £60 per month, saving you £15. When joining you can do so for £5 for your first 14 days.

As with all Tipping Gurus products ImRigged comes with a 60 day money back guarantee.

ImRigged has more than established itself as a major player in the tipping world. To have achieved eight months of consecutive profits with such an outstanding ROI is quite an achievement. It has achieved these profits without high stakes, or relying on a couple of big priced winners.

A major benefit is the selections are sent on the day of the race. This can help massively with account retention and also the ability to obtain the advised price. There are many services that achieve high ROI’s when tipping the evening before, those tipping on the day are much harder to find.

It’s an absolute no brainer to recommend ImRigged as an addition to anyone’s portfolio. Long may it’s success continue.

As always, we will continue to track and update results moving forwards.