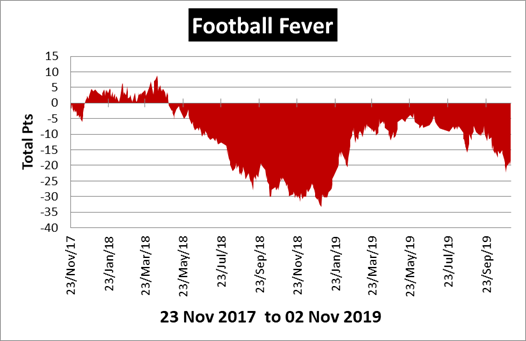 Below are the monthly figures since we started tracking Football Fever.

We reviewed the service between 23rd Nov 2017 and 23rd Feb 2018 and it produced the following results:

Football Fever is about as stress free a service as you will find to follow. With just 63 selections over the three month period you are averaging less than a pick a day. Alex is clearly very selective and even on weekends resists the temptation to up the number of tips. Indeed at no point were more than two picks ever offered on a single day. The advised bank is 50pts which is more than sufficient for a service of this nature. After a sluggish start we found ourselves 5.38pts down 19 days into the review, however we were back in profit within a week and didn’t dip below the line again.

The service focuses on the main leagues and competitions with picks from England, Scotland, Italy, France, Spain and Germany. The majority of the picks (37) were straight win selections although these actually made a slight loss of 0.11pts. Over/Under picks were the most successful eight of the twelve advised winning for a 4.67pts profit. HT/FT picks also generated a profit, 3.21pts to be exact with three successful picks.

Picks are sent by email between 9 and 10 am each morning. Odds are easily achievable and remain so for most of the day. There is no reasoning given behind the selections.

The cost of Football Fever is reasonable with a standard monthly subscription at £9.95 per month (£2.49 for first 30 days). Based upon this figure and operating at a standard £10 per point we did end up slightly in profit for our 3 months. Further saving can be made by opting for the quarterly subscription of £19.95, which works out at £6.65 per month.

Tipster Street has results showing from May 2015 till the end of January this year as follows:

Historically the service has performed a little better than during our review period but not to a massive extent. It confirms the nature of the service, very steady and dependable with a respectable 8% Return on Investment.

I would describe Foootball Fever as the ‘Grandad’ of tipping services. If you’re looking for a rollercoaster high risk/high reward service this most certainly isn’t for you. This service is about as low risk as you can get, looking back at it’s history the most it ever lost in a month is 11.45pts which again just scratches the surface of the advised 50pt bank.

The nature of Football Fever lends itself to higher stakes, indeed the Tipster Street site produce their figures to a recommended stake of £25. This of course is only advised if you have sufficient bank to do so.

It would have been nice to have seen a little more profit generated during our review but as the cost of the service is so reasonable (even more so on the Quarterly option) and the time required so light we cannot grumble too much.

The service would be perfect for someone dipping their toes into the paid tipster world and a safe reliable steady stream of income for the more experienced.

You can visit Football Fever by clicking here.