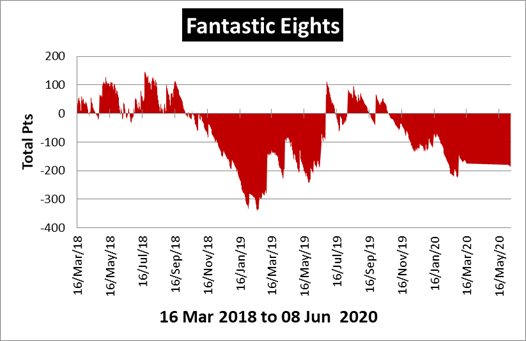 Below are the monthly figures since we started tracking Fantastic Eights.

Fantastic Eights is a professional horse racing tipster service that is part of the Betfan group. It concentrates on races with eight or fewer runners and all selections are win picks.

Selections for Fantastic Eights are sent out on the day of the race, generally between 12-2pm. You can also view them in the members area on the Betfan website. All selections are five point win bets, as such a large betting bank of 300pts is recommended by the service. Generally there are 1-2 bets per day. 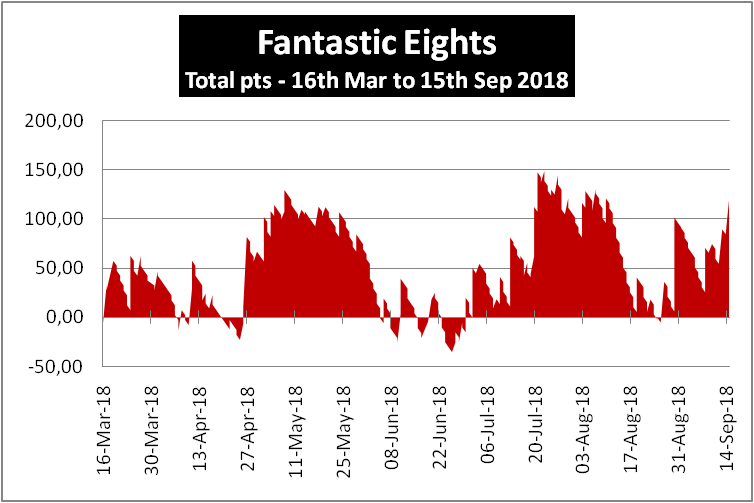 Fantastic Eights certainly took us on a topsy-turvy journey throughout the review process. This is to be expected with 5pt stakes and average odds of 10.13, there are going to be lengthy losing streaks from time to time that can rapidly eat away at the bank, compensated by big winners when they come in.  Overall Fantastic Eights ended 109.47 pts in profit after six months, averaging out to 18.25pts a month.

As is paramount with all services, but even more so with Fantastic Eights bank management is essential. The advised betting bank of 300pts is there for a reason, as can be seen during our review there were twice drawdowns of approaching 150pts which is a significant amount if you haven’t got the necessary bank in place.

Fantastic Eights has some tremendous historical figures shown on the Betfan website since its launch in March 2015. The ROI of 20.84% is particularly impressive and much higher than the 5.71% during the six month review. Interestingly the strike rate is slightly lower which means the Average Odds (which aren’t shown) must have been quite a bit higher.

The cost of the service is £44 per month + VAT, so it most certainly isn’t a cheap service for just one or two selections daily. That said, you’re still left with a profit of £129.70 per month during the review based upon £10 per pt. You can choose to subscribe for three months which effectively gives you one month for free.

Fantastic Eights as mentioned above is a service where the betting bank is crucial. When betting on double figure prices losing runs are an absolute certainty. When staking 5pts per bet it can eat into your bank quickly. As such the advised betting bank of 300pts is a must.

That being said, if you have a sufficient bank Fantastic Eights does have some serious potential. The worry is the ROI of the service has dropped from just over 20% historically to just over 5% during the six month review. It’s still a reasonable figure but it will be interesting to see if Fantastic Eights can move back towards it’s historical figures or if it is the start of a general downhill trend.

Everything else about Fantastic Eights is positive. Selections are delivered in a timely manner daily and are available via the website too. The time investment is minimal with on average 1-2 selections daily. The service isn’t chasing early odds either so will fly under the radar of bookies much easier.

As always results will be updated daily and the monthly figures are shown at the top of the page.