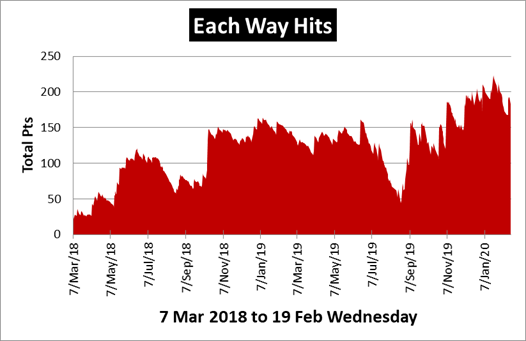 Below are the monthly figures since we started tracking Each Way Hits.

Each Way Hits is a service provided by a gentleman called Gavin on the Betfan platform. As you can guess from its title it’s focusing on higher priced value horses to ensure a profit is made if they place.

We reviewed the service between 7th March and 6th November and it produced the following results:

There is no doubt whatsoever that Each Way Hits has more than proved itself during the eight months we have been tracking it. It has generated a profit of 142.14pts, which works out to 17.77 pts per month, or £177.70 based upon £10 per pt selections. The ROI is an outstanding 63.88%. The service is very selective indeed with most days there just being the one selection and it isn’t afraid to have a no bet day. 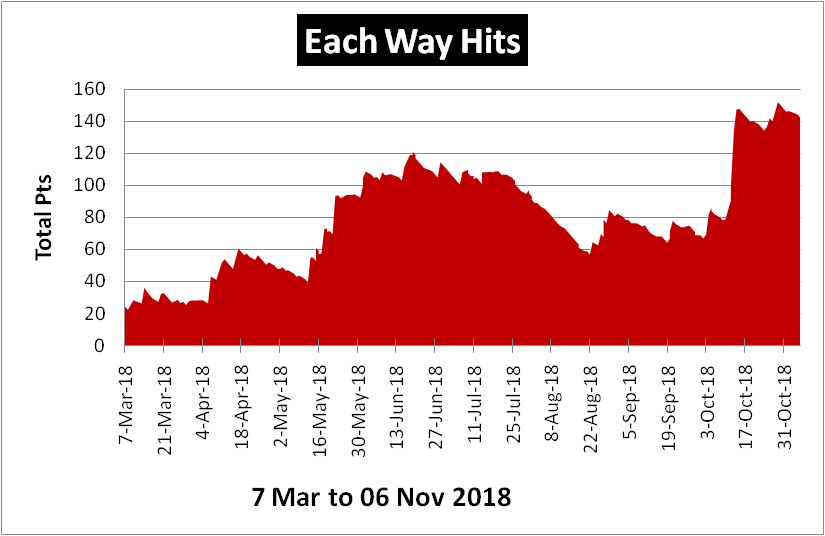 There is no advised betting bank but I would suggest a figure of 100pts would be more than sufficient given the low amount of selections advised.

As you would expect for a service with average advised odds in double figures there are losing runs and we did hit a tough spell during the review over the summer months where a loss was made in July, August and September. This was wiped out and then some by a tremendous October which catapulted the profits forward again. Once again this demonstrated the absolute importance of working to a betting bank and remaining patient.

As mentioned on most days there is just the one selection which makes Each Way Hits very straight forward to follow with the overwhelming majority of the selections being 1pt E/W picks.

Picks are sent by email each evening between 6-8pm. It is very important to ensure you get as close to the advised price as possible. Each Way Hits is not profitable to SP as it lost 55pts during the review period. That being said, you don’t see the dramatic drop in prices you sometimes see once the pick is released and you can often get the same or very close to the price the following morning which helps with account retention, as does the very low amount of selections of course. It is wise to have numerous bookmaker accounts and spread the picks around.

There are no write-ups or explanations with the selections, it’s a service that very much let’s its numbers do the talking.

Each Way Hits has operated on Betfan since 21st June and these are the results they have so far:

Again these figures are excellent. The ROI is lower than in our review period but that is primarily due to a significant change that occurred in the service just prior to us beginning the review. In the early days of Each Way hits the volume of selections was much higher with often 4-5 picks being advised. Although this led to more profit it meant the ROI was lower.

If you have a good range of accounts to play with then this Each Way Hits would be an excellent addition to your portfolio. It is extremely easy to follow with just one pick a day and the results produced speak for themselves.

The service isn’t cheap at £45 per month, but when the average profit is £177 per month (based on £10 per pt) you’re making a healthy profit. Taking advantage of the quarterly option of £90 gives you additional savings.

One Reply to “Each Way Hits”