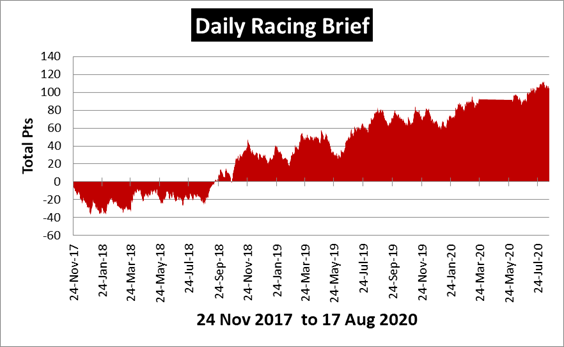 Below are the monthly figures since we started tracking Daily Racing Brief.

Daily Racing Brief is a service provided by SportsWorld Publishing. It is provided by Joe Thorpe who it is said has 30 years experience in the industry working for multiple bookmakers in that time. It began in June 2016 and at the the time of the review had only ever had one losing month, the one prior to this review starting where it lost 0.51pts! We reviewed the service for five months with the following results:

Alas after the great run this service has had it hit a relatively poor patch from the start of our review. The damage was done in the first 30 days or so at the end of which we found ourselves 36pts down. From there we had some ups and downs over the next couple of months before gaining some traction towards the end of the review. 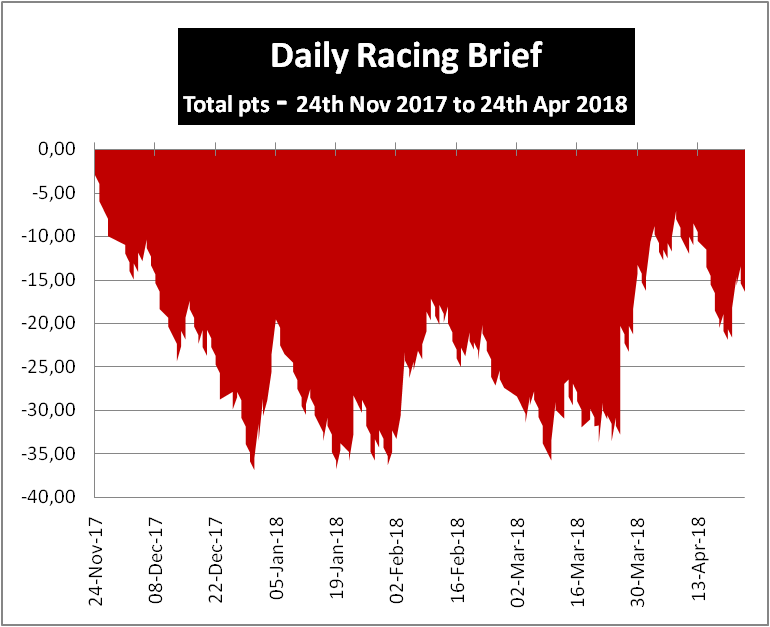 Daily Racing Brief itself is simple to follow. Tips are sent late of an evening, usually between 11pm and midnight and generally consist of two picks (there are three on rare occasions). A small write up for each pick is provided with information from Timeform plus a Summary on why the horse has been chosen.

The staking plan is simple with never more than 1pt being staked, the vast majority of the time as a win bet with the odd 0.5pt e/w pick along the way. There were 17 such each way picks throughout the trial and they generated a profit of just over 4pts.

There is no mention of a betting bank on the site but I would advise 100pts should be more than sufficient.

As mentioned at the beginning of the review Daily Racing Brief has an excellent history behind it. From it’s launch on 1st June 2016 till the end of April 2018 it has generated 536.49pts of profit, an average of 23.33 pts per month.

The cost of The Daily Racing Brief is £40 per month which is towards the expensive side for services of this nature. However, for the first 15 months of its lifespan it would have been money well spent.

Based solely upon our review, which over a five month period was not a short one, Daily Racing Brief obviously falls short of requirements as we made a loss. However, there is significant hope here in that it did begin to recover from the poor run at the tail end of 2017/early 2018.  The history shows it to be a solid performing service but, of course, our reviews focus in the main on how it has performed since we began following. As such, it falls into the ‘one to watch’ category. Should it revert back to its prior form the service will soon be moving up our rankings and increasing its confidence rating.

As always, we will continue to track and update results moving forwards.

One Reply to “Daily Racing Brief”