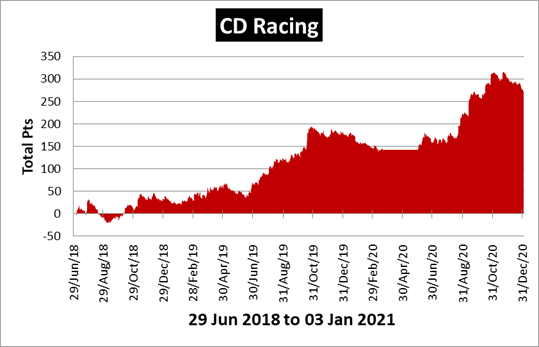 Below are the monthly figures since we started tracking CD Racing.

CD Racing is a service provided by The Tipsters Empire network. It is run by a gentleman called Christian who has followed racing from a young age. You can read more about him on the Tipsters Empire site. The service covers both Flat and National Hunt racing, providing tips from short priced favorites to longer priced outsiders, all in search of that elusive value. CD Racing began proofing picks on the Tipsters Empire in January 2018 and quickly began to prove itself.

We have been following the service since 29th June 2018 and up till 10th December it has produced the following results: 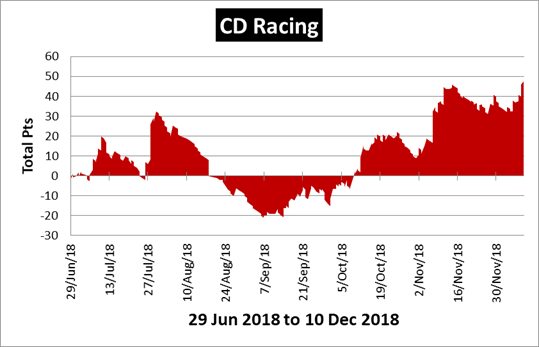 After a bright start that saw us hit 30pts profit by the end of the first month CD Racing had a tough time through August and early September and fell to around 20pts down. That spell was soon overcome however and the service got back on track and clawed it’s way back into profit and the current figure of 46.48pts. That works out at 8.72pts profit per month or £87.20 to £10 per pt. The ROI is a very respectable 15.32%.

As we can see the vast quantity of the picks are either 0.5pt e/w or 1pt wins. There were nine increased stakes picks at shorter odds but only one of these came in, netting a loss on those.

Picks are sent usually between 6-8pm by email, text message and are also available in the members area on the Tipsters Empire website. A full write up is provided for each tip with the level of detail provided very high in comparison to most services. This gives a good insight into how the tipster is thinking and why he is making the selections. There is always a review of the previous days tips, win or lose, so no hiding from bad days.

Here is an example of a tip given:

Watersmeet ran a very promising race over an insufficient trip on his return from a break. He led into the home straight but was outpaced from that point to finish 4th of 10 in a Listed race over 12 furlongs. Watersmeet is bumped up to a more suitable 2 miles now and he’s won 4 times from 8 all-weather starts at this distance.

Those wins were in conditions races rather than handicaps but the assessor has been kind to drop Watersmeet 4 pounds for his last run, he races off 102 today. He won a handicap off 100 a couple of years ago and was better than ever last Winter. He’s the one to beat in this. It’s likely that Fanning will be able to set his own fractions from the front, Watersmeet is a 13 time winner and will be a hard horse to pass.

Alqamar has plenty of ability but has only won once from 13 runs. He’s been a beaten favourite 5 times, including twice at odds-on. He’s not one to trust at a short price. Baydar has been consistent and running OK without winning this season. His mark doesn’t drop much due to his decent efforts.

Prices hold up well for most picks although some do fall considerably by race time. Generally prices have remained the same or close to the following morning.

The recommended betting bank is 100pts which was more than enough to cover the tough patch the service went through in August and given that was the worst run the service has had so far it should be more than sufficient.

The cost of the service is £34.99 (inc VAT) per month on the standard monthly plan but further discount can be had with quarterly, six month and annual plans available. The annual plan is £279.99, a 33% discount.

Here are the results of the service as shown on the Tipsters Empire site since its launch in August 2016.

Good solid figures with the ROI being very close what has been produced since we started following it which is always a good sign of consistency.

As with all services we review we will continue to monitor results, updating daily at the top of the page.

As with all Tipsters Empire services CD Racing is a very efficient service which I’ve thoroughly enjoyed following. The very detailed analysis given to each selection really does help to inspire confidence that the tipster knows what he is talking about and when this is backed up with good consistent results there is little to find fault with.

There was the one tough patch during August that CD Racing went through but it has bounced back and then some since then.

The service isn’t the cheapest out there but you most certainly get value from it. There is no excuse for missing tips as they are provided in three different ways (email, text and members area). Based upon £10 per pt you would have made an average of £54.21 per month after subscription fees. I expect that figure to be somewhat higher moving forwards though as August was an extreme month.

Best of all, as mentioned above, is the 28 day trial. I would strongly advise anyone to take advantage of that and see for yourself what the service is all about, at just £2.99 for the 28 days it’s a no brainer.