Below are the monthly figures since we started tracking Architect Tips.

We reviewed Architect Tips between 24th January and 24th April and it produced the following results: 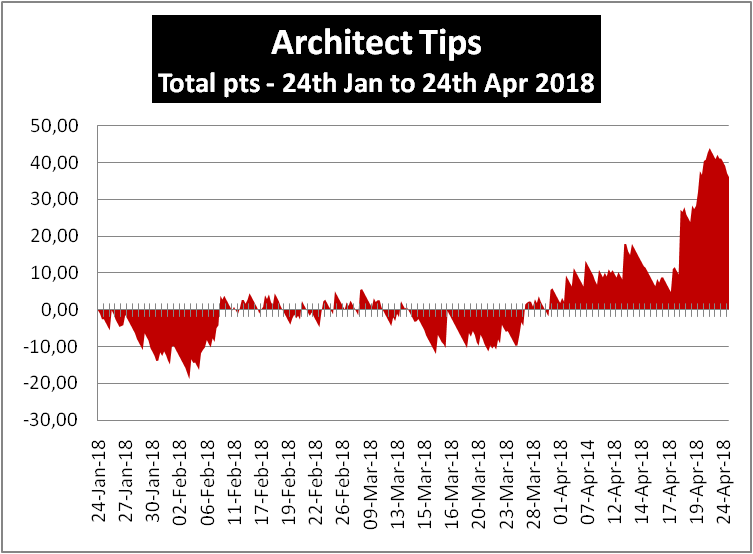 After a somewhat sluggish start in the first couple of weeks Architect Tips pretty much held it’s own over the next six weeks before really kicking into gear in the final month to end the review on a respectable profit of 36.06 pts, which works out to £360.60 when working to £10 per point.

As we can see the majority of the picks are either 0.5pt e/w or 1pt wins. Interestingly over the trial period the 0.5pt e/w picks lost just under 20pts whilst the 1pt win picks made 31pts profit. This can likely be put down to variance as the reverse is applicable on the 1pt e/w picks but it’s something we’ll keep an eye on going forwards.

Picks are sent usually between 7-9pm by email, text message and are also available in the members area on the Tipsters Empire website. A full write up is provided for each tip with the level of detail provided very high in comparison to most services. This gives a good insight into how the tipster is thinking and why he is making the selections.

Prices seem to hold up very well with little movement in price even when placing the following day.

The recommended betting bank is 100pts which obviously never came close to being an issue during the trial. Looking at the history of the service it has never been an issue either.

The cost of Architect Tips is £34.99 (inc VAT) per month on the standard monthly plan but further discount can be had with quarterly, six month and annual plans available. The annual plan is £279.99, a 33% discount.

Here are the results of Architect Tips as shown on the Tipsters Empire site since its launch in August 2016.

Architect Tips is a very good efficient service which I’ve thoroughly enjoyed following. The very detailed analysis given to each selection adds something to the service and makes you look forward to receiving that days picks.

Regular feedback is also given on how previous tips fared, including losing ones.

Of course, it’s all well and good talking the talk the most important aspect is the results and although they weren’t staggering during the trial they were decent enough. A monthly profit after subscription (£34.99) of £85.21 is not to be sniffed at, especially considering we had a poor month and a half. I see no reason why that figure shouldn’t increase moving forwards.