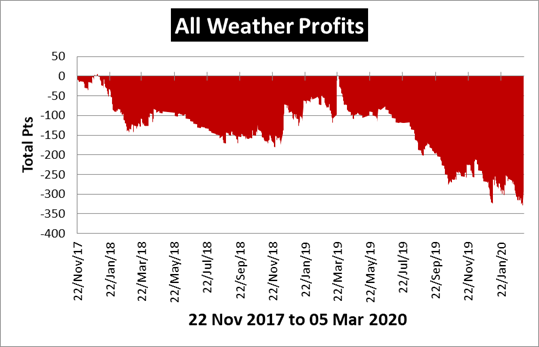 Below are the monthly figures since we started tracking All Weather Profits:

All Weather Profits is a service provided by The Tipster Street tipping platform. Operating since Jan 2014 it has quite an extensive history and has generated good profits in that time. We reviewed the service from 22nd November 2017 to 21st April 2018 with the following results

Unfortunately the trial didn’t got at all well for All Weather Profits as we suffered a heavy loss of 92.74pts. At the end of the usual 3 month trial that we do we were sitting at -132.47pts so we decided to extend to see if there would be any turnaround. There has been, with in April the service 40pts up as we speak. 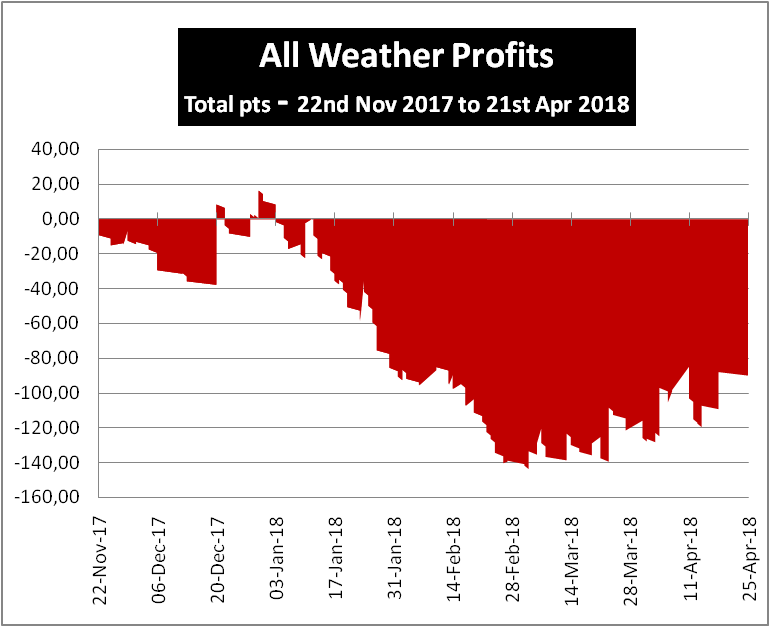 All Weather Profits uses a standard staking of 2pt Win selections with prices recorded at BSP (Betfair Starting Price). Tips are sent between 9am and 10am daily. Usually there are around five selections given although on some days with a couple of All Weather meetings there can be five or so from each meeting. Of course All Weather racing doesn’t take place every day so there are plenty of No Selection days as well. Overall across the 5 months it averaged to just under 3 picks a day.

Tipster Street has now transitioned to a very nice new website and picks are available in the members section there too. There are no write ups or explanations given on the selections.

Things got off to a sluggish start during the review and we found ourselves 40pts down approaching mid December before hitting a run of six winners our of nine which propelled us into profit and gave hope moving forwards. Another small dip followed before five successive winners on the 10th January put is back into profit for the final time. Unfortunately from that point on things went very pear shaped with 89pts lost in the remainder of the month. That decline continued throughout February and into March with the lowest point being -145.50 pts on 21st March. From there things have improved with the next month (22nd March to 21st April) bringing in 52.86pts of profit.

The advised betting bank for the service is 250pts so it must be said that if you were working strictly to that bank you still had plenty of leeway. However it is difficult to imagine many new members sticking around for long throughout that horrific run at the start of the year.

Tipster Street provide full accurate results of previous tips on their site and the historic figures are shown above. As the figures show the service has been profitable over the years which is no mean feat when working to BSP. A closer look at the history of the service shows that as recently as the end of September 2017 the profit stood at 574.08pts. A decline then kicked in which continued throughout our review until the last month when things have begun to move forwards again.

Obviously given the losses incurred in our trial All Weather Profits is not a service I can heartily recommend at this time. However, given it’s history and the upturn we have seen there is potential here. Time will tell us if the 5.5 month period from October through to mid March were an aberration or a sign that the service has lost its way.

As always we’ll be updating results on a regular basis so if the service gets back to the levels it had over its first 3+ years it will be one to watch with interest.

Learn more about All Weather Profits by clicking here