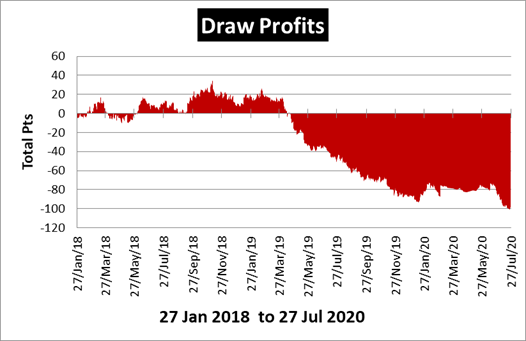 Below are the monthly figures since we started tracking Draw Profits:

Draw Doubles has been renamed Draw Profits and now simply recommends single bets. All results tracked are for the singles service only.

We have now been following Draw Profits for just over 1 year and are pleased to see that the service has turned things around since our review. At the end of the initial three month review below we were slightly down (7.26pts) but following profit in eight of the subsequent months we now sit 24.19pts in profit.

Some tweaks were made to the system and it appears to be paying dividends with an excellent start to 2019.

You can learn more about the service here,

Draw Doubles  is a service provided by John Baker of Banker bets fame. Draw Doubles claims to use a highly sophisticated, software based algorithm to identify the highest value draw bets from leagues around the world.

We reviewed the service between 27th January and 27th April and it produced the following results:

The first thing to mention is there are two methods of following Draw Doubles. When selections are made they are done so in groups of three. You can then either place three singles bets, or three double bets, or both if you prefer.

All selections are 1pt picks, so you would either place three x 1pt picks on each match, or 1pt doubles on each combination.. Udinese & Chaves, Chaves & Penafiel, Udinese & Penafiel.

Over the period of our review the singles service faired the better although we did end up 7.26pts down by the end of the review. The doubles service trailed somewhat with a figure of -27.25pts.

The advised betting banks are 50pts for the singles service and 150pts for the doubles, whilst following both you should operate a 200pt bank.

Selections are sent by email usually between 10pm and midnight for games the following day. The amount of selections can vary quite a bit with the weekends of course being the busiest times with up to five ‘sets’ of selections (three games per set) being advised at times. During the week there are days with no qualifying picks.

The odds advised are ‘average’ odds and you can generally find better so there are absolutely no issues with regards to obtaining the price.

Each email contains a brief update on previous results and there is a running total of the service’s performance thus far both for that month and overall. Customer service seems good with any queries answered in a timely fashion.

After a sluggish start the singles system was progressing nicely moving to over 20pts of profit by the mid point of the review (the doubles was also 5pts up at this time) but a terrible last week in March and first week in April saw us drop to -12pts (-60 on the doubles) before a recovery was made to bring back up the figures listed above. There was some bad luck involved during that bad run with numerous late goals costing us winning picks. This is of course to be expected but over a period of time you would hope that it evened out with some of those late goals being in favor rather than against.

The cost of the service is £37 per month with additional savings being made when subscribing quarterly or annualy. All payments come with a 30 day money back guarantee.

Draw Doubles is a relatively new service, only beginning operating in October 2017 and has produced the following results according to the website:

In all honesty I think it is still too early to tell the long term viability of this system. A loss was made during our review period which of course is never ideal but looking at the results achieved at the tail end of last year decent profits were made so it remains to be seen which of those periods was the anomaly.

It’s clear that just betting on the singles is the lower risk/lower reward way of going about things but if a level of consistency can be found the doubles method could be far more rewarding.

Draw Doubles isn’t cheap, with the standard payment being £37 per month so you would want to be making a profit when paying for such a service.

As is often the case with a new service such as this it’s too early to make a definitive decision on the long term merits. Clearly based upon the results achieved during the review it’s not one I can recommend at this stage but it wouldn’t take much for things to turn around.

Keep an eye on the results at the top of the page and the league table to see how Draw Doubles fares ongoing.