Chloe’s Football Focus is a football tipping service that is part of the Betting Gods stable.

The service covers football from all over the globe, including Europe, South America and even Australia with a range of different bet types from Match Winner to Over/Unders and Handicaps.

Chloe’s Football Focus is a service that is looking for value, so often you will find yourself backing the underdog.

We reviewed the service from 1st January to 31st March and it produced the following results:

Not a bad set of results overall as the service produced 33.47pts profit over the three month period. The Strike Rate was 28.78% which you may think is low at first glance, but at average odds of 4.83 that’s a decent figure. The ROI was 9.76%, a very healthy figure for a football service. 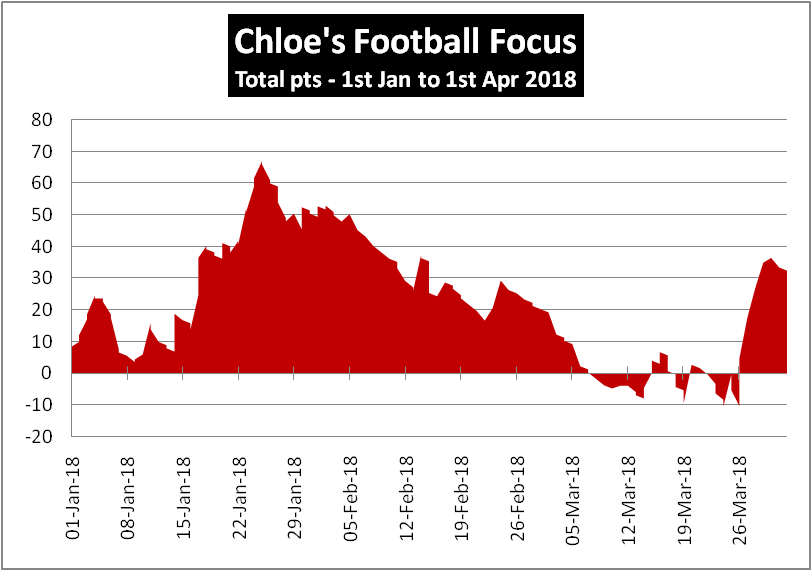 The review got off to a flying start, hitting 66.97pts profit by the 25th January. The next two months proved to be tough however and approaching the end of the review (25th March) we were actually sitting on -10pts. A cracking last five days of March pulled things out of the bag and left us with a reasonable profit.

I stress this on every review but this once again demonstrates the absolute importance of operating a betting bank and sticking to it. The advised betting bank for this service is 150pts which is appropriate for one of this nature. As the review period showed, when backing longer priced picks (4.83 in football terms is long), losing runs WILL occur. The run from Jan 25th to Mar 25th saw the service lose 77pts which is not a figure to be sniffed at but is only just over half of the advised bank. Anyone not working to such a bank could find themselves in problems.

Selections are generally sent early morning, usually arriving between 7 and 9am. Occasionally they are sent the night before if there is an early game the following day. Occasionally there is a write-up giving the rationale behind the selections but for the most part it is just the tip you are provided with.

Chloe’s Football Focus is very selective with on average 1-2 tips per day and prices have been easily attainable.

There can be quite a variation in stake sizes. Chloe advises that she calculates the EV (Estimated Value) of a selection and the better the value the higher stake she will advise. A breakdown of the stakes and their success can be found below:

The obvious issue that stands out is that the bulk of the selections are of the 1pt and 2pt variety and these combined resulted in a loss of 35.48pts. Of course this is offset by the higher staked picks which brought in a total profit of 67.95pts.

On the one hand this suggests that it is imperative you follow the staking system advised as if you had worked to level stakes of 1pt across all selections you would have found yourself -5.71pts down at the end of the three months.

On the flip side it means the bulk of the profits during the review came from a relatively small selection of tips, 45 to be exact or 31.9% of the advised picks.

Four different types of bets were offered during the review, Match Winner, Handicap, Draw No bets and Over/Unders. Here is the breakdown:

The interesting information here is the standard ‘Win’ bets have performed head and shoulders above all else during the review period. A 26.76% strike rate with Average odds of 5.95 is very good indeed and helped to generate 50.42pts of profit.

The under-performing area was the Over/Under which dragged the service down somewhat with -19.42pts.

It will be interesting to track this moving forwards and see if it is an ongoing trend or just variance over the three month period.

The cost of Chloe’s Football Focus is reasonable. It is £1 for the first 10 days and then £25 per month subsequently. Considerable savings can be made on the quarterly and annual subscriptions, the annual one in particular effectively giving you 50% off (£150 for the year). All figures are without VAT.

Taking into account the standard monthly fee an average profit of 3.66pts per month were made over the review period.

Let’s take a look at how Chloe’s Football Focus has performed since launch:

These figures clearly are astounding but I would treat them with a little caution. The overwhelming majority of the profit was made during the proofing period. At the end of 4 months of proofing the profit stood at 655.79pts, which means since going ‘live’ a further 46.54pts has been added in the space of six months.

This is quite a common trait, although not to this extreme. I must add that there is nothing suspicious here in terms of the record keeping at Betting Gods but very often the mindset of a tipster can change once they go ‘live’. There was a much greater frequency of 10pt selections during the proofing period. It’s a period where a tipster knows people aren’t following with their hard earned money so can be a little more carefree with their staking, perhaps to ‘make an impression’ etc. Once a service goes live it can psychologically have an effect and cause the tipster to be more ‘cautious’ than they might normally be and miss out on opportunities as a result. This is why we put much more emphasis on results when services are live than pre-launch.

Chloe’s Football Focus is a tricky one to judge. Clearly the potential is there as the pre-live figures show but since then the results have alternated between good month and bad month. Overall it has continued to gradually move forwards however, with a very good April thus far (30pts profit) which isn’t included in the review figures. It will be interesting to see if this momentum can be maintained as we approach the period of the year where the massive profits were made in proofing.

At this point in time I’d like to see more before I can give it an outright recommendation, but it’s certainly not one I would advise against.